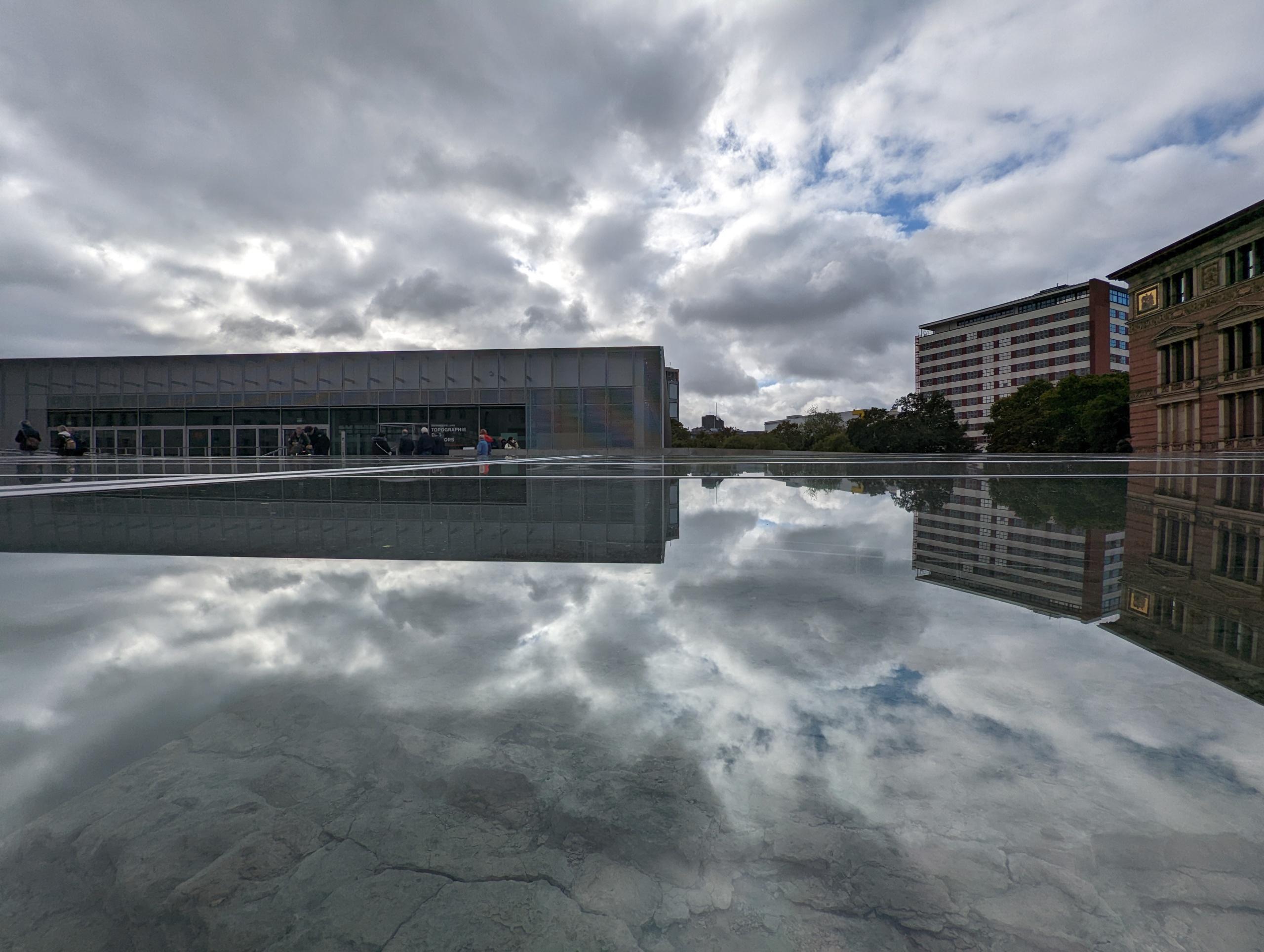 Someone had the glorious idea to have a GORUCK event in Berlin. No, not one, not two, but three GORUCK events (BASIC style) – GORUCK BASIC are events for around six hours, including plenty of rucking, plenty or PT, exhaustion, sore feet, maybe some water, and learning.

Not „just“ psychologically („I think I can I think I can“) but literally learning about history. Now, again, I am probably one of the oldest participants. I do recall going to Berlin when I was a teen. When I was a young adult. When I was at some conference, just after the Wall fell. When we raced the Berlin Marathon. The first visits always were scary. Passing through the GDR. Waiting for some policeman to tell you not to do this or that (e.g. putting your feet on the seat in the train. Listening to Western music in your tape deck in the car. Getting too close to the Brandenburg Gate… scarily serious looking persons watching the area. Knowing people had guns and knew how to use those)

I am from a medical and police family. Guns at first won’t scare me, but the thing not to pinpoint was always the atmosphere… ‚Nough said, I kind of thought I knew it all. And then there is an event, Ruck through Berlin West. Ruck through Berlin East. Ruck along the former Wall. All of this together with a guy, Alex, who happened to have been growing up in the enclosed city. So. No. I didn’t know it all, from the beginning this ruck was full of new information, areas I had never seen. featuring the atmosphere, then and now.

So we got to meet at 6AM on Saturday morning, after a short night in a hostel. Berlin tram brought us to the start, we met Cadre Fury, who greeted us who did a roll call, some PT, by definition of everyone of us, and we had a really cool ruck through the city. learning about historical buildings, happenings, earned our patch.

On saturday afternoon there was a meet-up in a brewery. It was announced as a raffle – and we had food and beer. My daily mile was done by then so we had a large table – good conversations and then the raffle. And… I won the second price – a GORUCK plate carrier. wow!

Eventually we walked back to the hostel.

Sunday morning, same procedure, just using the U to Leipziger Platz. Here Cadre managed to create an atmosphere, very close to that authoritative set-up the Easterners had. Control your backpack. Where’s your ID. Do only eat when I say… and – this worked. The guy next to me had a banana. And I really was thinking what would happen if I gave him away to our cadre who very clearly had said not to eat unless he tells… The banana vanished and nobody noticed. furtile resistance – but only in a mock scenario. Would we be able to go through with something this simple in a real scenario? This is always the question.

Would I have resisted the GDR regime? I seriously wouldn’t know but I would hope that I would have.

Ruck through East Berlin. Eery emptiness. People being indoors in their apartments, also in the wide and open parade streets. Maybe they were watching. Alex said they might. I kind of felt a bit of this, just because it was so empty in this otherwise bustling city.

We saved Lady Heidi from the police or Stasi. All right, we stopped transporting her at the end of our ruck which happened to be at the former Stasi building. Poor Heidi (Heidi was a construction of two 80pound and one 120 pound sand bags)… She might not have survived but we tried to be somewhat inconspicuous

Heidi’s inner organs were dumped in some bushes and we took the empty sandbags back via U to the hostel. Wearing the same shoes two days in a row. I was wondering if the third day would work too. Additionally I had bought a smaller rucker which I put my 30# plate in, to use for Monday, the actual day of German Unity. This was way more comfy. Glad I bought this one.

We met at a chapel reminicing of the reunification. The wall was stylized by steel poles in the ground, one could see the old walls of Bernauer Strasse. People had been so desparate to jump out of buildings to get over the border.

Some visiting the documentation, then following the wall line. Part of it water. Learning that people drowned when nobody in the west dared to jump in the water to rescue them. Visiting the holocaust monument along the way. More wall, graffitized wall. and finally our ceremony. patches. and the triple patches.

Physically this was way less demanding than I had thought. Well… arm muscles need to be trained more, I know, but generally rucking went okay, we had lots of breaks to learn things. The third day – I had feared somewhat, but – step by step by step…

And the flood of information kept me alert. And the team. Of course there were random step-ups. Stairs. More stairs. Some backpacks changed carrier. Lying on the floor doing flutterkick. One Two Three One One Two Three Two ….. Team work to carry Heidi. To conceal her. Logistics. Navigation. Always the question – what would I have done. In this situation or another.

Philosophically this goes further. Why the heck do Humans need borders, walls, fences? Yes people need rules. Don’t kill each other. don’t steal. respect people. All this. But why borders when breaking them carries the death penalty? Going through West Berlin – this was just a history-laden tour, not a hard GORUCK event but hard enough for the shoulders to complain. Going though West Berlin also means the first glimpse onto those borders which seem so necessary to keep people from their freedom to choose.

The Eastern part – much more so because it was different. This was a society I did not grow up in. Yes, my mom told me they had to shut up outside the house. She’s born in 1939. Little kids‘ words can kill a family and friends. Same in the GDR. No freedom to choose what to say and what not. Which drives me mad when I have people complaining about laws in exactly that matter „hey our government wants to rule us all – forbids this, makes that mandatory… I am sooo unfree“ – people saying this who do not really know what freedom – or especially non-freedom means. And what a border between freedom and unfree means.

The Wall. My thoughts went around Europe. If you have friends you might discuss things but you do not shoot each other. Europe had a huge wall as well, an Iron Curtain. Government employed dad who got in trouble for staying as tourist – a day to long – on the other side .

Europe should be exactly that – the team of free – friends – sometimes discussing things and maybe not agreeing in all but having the freedom to have opinions and own solutions and disagreement. No room for war, then.

We shall not save our planet country by country. If we want to have a chance, no borders are allowed.

Back to Berlin. An excellent example of borders being destroyed. On a high risk to the people but finally the obvious part got destroyes. Yet, as the five new states are still not fully arrived, in my opinion, we also could see the differences between the East and Western sectors. Probably this takes a few more generations.

This was such e fulfilling weekend – thanks to all who participated and who organized!!!